She lay face down in the grass breathing in its scent. Her exhalation was dry and scorched, her throat raw making her sob. The dark fire still burned in her chest, it's heat heavy crushing her heart.

She swallowed, drinking the moisture from the air.  She rolled over and gazed upwards. Relief permeated her as the sky above entered her eyes and filled her with blue light. The burning abated and she sighed in gratitude as her heart expanded. A minute passed and her mind cleared.

Move away from the black hole in the earth that she had come through moments before. She didn't have long.

Her body tensed ready for movement but she did not stir. What was it that kept her pinned like lead to the earth?

Fierce colours clouded her eyes once more. Incandescent white hot yellow, blistering red brown and black, seductive and so dark it swallowed her whole. The heat in her chest flared, her heart jumped as she sensed the shadow return. She tried to push it away. She must run while she still could. She had fought so hard to get this far that she couldn't give up now. Panic rose up her throat and her mouth filled with a sour taste.

With a great effort she sat up and then breathing heavily she stood upright.  She glanced around her and saw she was in glade of cypress. White flowers grew among the grasses at her feet. An endless sea of pale asphodel flashed across her inner landscape. She blinked to erase it.

She turned and headed away from the hole in the ground to follow a clear path through the trees. The sun overhead lit the scene around her and showed the colours, shapes and textures at their most striking and vivid. It was her first view of her beloved Earth for many months. But she didn't feel joy. Why was that? All she could feel was the heavy weight on her chest and a dragging, pulling sensation from her solar plexus as though she were attached by a cord to something behind her. Attached to what?

She knew what it was. Her mind's eye was again covered with shadows, this time moving, blurred, gradually becoming more distinct. Ghostly figures wandering through the fields and along the banks of the river, stooping to drink the amnesic waters.  Fine, transparent sails swelling with a silent wind propelling the boats and their passengers through the waters to the islands of Elysium.

Her mind flew to another scene; three roads converging, at that place where the shades received their final judgment. Beyond that, a vast field of crimson poppies through which a granite grey road wound its way towards the palace on the horizon. Her mind covered that distance in an instant and stopped in front of the adamantine gates. The palace towered above her, obsidian black. A deafening grinding noise began as the gates slowly lifted. Her heart leapt into her mouth when a deep bellow came from within the walls and she heard the sound of powerful hooves and a thundering roar as the chariot came hurtling through the opening towards her. She froze suspended from her vantage point as four black horses bore down upon her at full gallop. The driver stood erect, black hair and cape flying around him, holding the reins in one hand as he drove his beasts on with a savage whip. She gasped as he passed through her, his blazing amber eyes boring into hers as though he could see her stood before him in her flesh, blood and bone body.

She tore her mind back to the sunlit world.

Her swift pace faltered then stopped. She couldn't breathe. The burning in her chest had grown stronger again. It spread to her throat, heat rising up her neck to her face as sweat broke out on her upper lip. Tears welled in the corners of her eyes and she let out a high-pitched moan as she sank to her knees.

She couldn't bear it. The pain was too intense. She was sure she was going to die from it. No one could tolerate this agony. She had to get away from here. She had to get away before he came for her. She hated him, loathed him with all of her being. He had taken everything away from her. He cared nothing for her. He saw her as a trophy, a prize and she despised him for it.  He was evil, manipulative. He had tried to trick her into eating the succulent pink seeds but she had seen through his sweet deceit. She would not surrender to his desire to keep her with him. 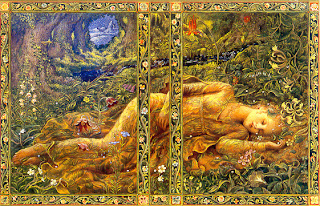 She stood once more and began to run but she stumbled as exhaustion crippled her and her head span. Nausea overcame her and her vision filled with expanding black circles until she could no longer see. She dropped to the ground and lay face up, breathing heavily until her sight returned.

Her inner voice was silent as she recovered her strength. Eyes closed, her awareness extended outwards into her tranquil surroundings. She listened and gradually sounds became more distinct. Birds chirping, insects humming, a soft breeze moving the leaves of the trees. The peace around her seeped through her pores, caressing, cooling, softening. She felt the tension release as she exhaled the heat from her lungs.

She realised something was different. She felt quiet, tranquil. The pain had diminished, the fire no longer burned inside her. Why was that? She contemplated the question for a while and then she knew. She had surrendered the struggle. She had stopped the battle that was raging inside her.

At that moment a huge tremor shook the earth beneath her. There was an almighty crack as the earth split open, gaping like an enormous mouth. From its dark cavity came four horses snorting with effort as they dragged themselves and the chariot behind them into the sunlight. The driver called the horses to a halt as he saw her now sitting a few yards away from him.  Amber eyes met hers, at first furious and accusing then softening, beseeching, beckoning.

She waited for a moment, then she stood up and walked slowly towards them.